How have ‘ordinary people’ come together to make decisions about their places, spaces and communities? In this research report, Debbie Humphry explores the story of the Golborne Community Plan and Neighbourhood Council in 1970s London, tracing interconnections of personalities, ideologies and campaigns.

According to the Golborne community newsletters (SRC 1971a, 1971b), this is the first time ‘ordinary people’ had the opportunity to decide how their area would be rebuilt, delivered through a Community Plan and guided by the first democratically-elected Neighbourhood Council in the UK. There were high hopes for the Golborne Community Plan (GCP) and the Golborne Neighbourhood Council (GNC), both from the community and the Greater London Council (GLC), with claims to it being the bravest community initiative in public participation for 100 years, with hopes for widespread replication nationally (Community Action 1973; Frost and Sharman 1973). However, the outcomes were marked by community conflict, with the GNC accused of being dominated by middle-class community representatives. The GNC’s organisational structure imitated that of the local authority and, as such, was oriented towards acceptance and co-option by the local state (RBKC and GLC), whilst regarded by some as insufficiently inclusive or representative of the area’s working-class and ethnically-diverse populations (Community Action 1973; Frost and Sharman 1973; Schofield and Jones 2019). Nevertheless, the key plan (The Swinbrook Community Plan) emerged from the persistent community efforts to take control of shaping their own neighbourhood and the case is fascinating in terms of the network of grassroots groups underpinning the plan with their aim to take hold of urban renewal themselves. The successes and failures tell of struggles for power situated within wider ideological and political battles of the time, between paternalism and participation, between working-class and middle-class organising, between the New Left and Black Power, between individualist and structural analyses and between the community and the state.

The Golborne Neighbourhood Council was created to forward the Golborne Community Plan which, as well as The Swinbrook Plan, included playspaces, a community centre, meeting places and local amenities in the bays under the Westway.  Local people were urged to vote for the Neighbourhood Council candidates in order to claim their right to have a say in what affected their lives and to bridge the “abyss between people and government” (GNC 1971) (Figure 2). The elected body of GNC councillors were local people who managed the plan’s progress and liaised with the council planning department, the GLC and community-selected architects.

The Swinbrook Community Plan (SCP) was one of the most significant plans developed by GNC councillors and residents and was focused on rebuilding the dilapidated Victorian housing as an innovative maisonette development to rehouse 1,400 households. (Community Action 1972). The SCP was situated in the Swinbrook area in the Golborne Ward of North Kensington: north of the Westway motorway extension (opened 1970) and south of the Trellick Tower (opened 1972) (Fig 3).

However, despite these promising beginnings, differences within the GNC were evident, as some were unhappy with the unelected George Clark’s powerful position within it, a controversial figure who had moved into the area and innovated several community-led organisations and projects (SRC 1971b). Community Action Journal (1973) reported that Clark was manipulative and used his middle-class articulacy and knowledge of the official systems to dominate proceedings and push his own view forwards at the expense of the other GNC councillors and the community at large. However, others on the ground valued Clark’s capacity for innovating and catalysing community action. Clark had put Michael Young’s concept of neighbourhood councils into practice with the aim of enfranchising localised communities: somewhat analogous to parish councils and derived from the mediaeval administrative ‘hundreds’ that devolved power to local assemblies (It was initially called the Golborne 100).

The post-Skeffington policy of education also faced criticism, cast by some as the imposition of an arrogant middle-class on the working-class. As Community Action reported, Joe Crothers, a local working-class resident, commented, “I don’t need educating to know what I want to do around here – so we can talk like George Clark and no one can understand us” 1973, p.32). The GNC’s adoption of a formal organisational structure was criticised on similar grounds, modelled as it was on the local authority –  like a “mini town hall” (Ibid 1973, p.32). This structure was intentionally designed to “dovetail into the bottom of the local government pyramid” (Ibid 1973, p.32) as a way to lend legitimacy and articulate with the local authority system in order to maximise the influence of community interests. However, some felt that its insertion into existing local government structures was restrictive, “a pyramid in which freedom of political action is practically impossible” (Ibid 1973, p.32). As such, the GNC was accused of reinforcing existing power structures, “the danger is clear: that independent political action at neighbourhood level can be – and is being – outflanked, institutionalised and defused by central and local government agencies” (Ibid. 1973, p.32). Meanwhile, local working-class people, less familiar with the GNC formal structures and how to perform within them, lost voice and power, and thus structures of class and power were reproduced, “Why are the English working class still copying structures evolved by the ruling class?” (Ibid. 1973, p.32). The conflicts within the GNC led to its virtual dissolution by 1973, two years after it was formed (Community Action 1972). Nevertheless, despite the differences of personalities and ideological approaches, the GNC was key to the implementation of the Swinbrook Plan, with the GLC gaining approval for CPO of the site in 1974 (Community Action 1974).

More broadly, the community plans emerged from more than 10 years of community organising, which intensified in this area following the 1958 race attacks and riots levelled at the Black-Caribbean migrant population. This catalysed the emergence of Black Power organising in the area and also less radical, welfare-oriented grassroots community organising as many white middle-class New Left community/social workers and activists were attracted to the area from the 1960s (Nishikowa 2014, including interview with Stuart Hall; Curtis 2021). The liberals took a more integrationist, welfarist community development approach on the basis that  addressing deprivation and poor housing conditions in the area would also address issues of racial conflict (Schofield and Jones 2019). The more radical Black Power approach, on the other hand, named and addressed the key problems of racism.

The GCP and GNC emerged from the Left liberal network of action and advice community groups, which were committed to grassroots organising, providing expert (but arguably paternalistic) support alongside a tradition of self-help that emphasised communities doing it for themselves. These overlapping groups included local residents and workers, liberal community workers, activists, academics, councillors and a radical Methodists minister and church. At the same time there were frictions and factions within them (Community Action 1973). Despite critiques of a dilution of radicalism and local power, especially as the plan progressed via necessary involvement with powerful government agents (London County Council, the GLC and the Royal borough of Kensington and Chelsea), nevertheless the network of grassroots organisations made genuine efforts to engage local working-class residents and traders’ local knowledge, action and decision-making (Schofield and Jones 2019).

The GCP emerged in the wider political context of a recent backlash against high-rise development as a response to slum clearance and also at a time when the New Left was rejecting the post-war statist approach that had failed to relieve deprivation –  so evident in the multi-ethnic and shifting ‘twilight’ communities of North Kensington. The GCP aimed to find a high-density solution without resorting to high-rise, using Hal Higgins prototype architectural designs for a double-decked maisonette phased development in the Swinbrook Rd area, including community facilities and residents’ right to remain (Figs 4 & 5).

In 1974 the GLC application to acquire the Swinbrook site by CPO was given the go ahead, based on the strength of the Swinbrook Community Plan, including its insistence that all the existing residents should be rehoused via a phased development system (Community Action 1974), something that tenants today still have to fight for today when their estates are demolished and rebuilt. At the time there were anxieties about council homes being less affordable than the private rented sector, a striking reverse of the situation in London today.

The Golborne Plan’s integrative welfarist ‘colour blind’ approach arguably failed to adequately engage with the concerns of the Black community, whilst the grassroots and working-class inclusion and influence weakened as the Plan was ultimately appropriated by more powerful white, middle-class state players (Community Action 1973; Schofield and Jones 2019). Nevertheless, the case uncovers an important hidden history of early community-led planning, situated within the emergence of community development organising. The factions, struggles, inclusions and exclusions across the network of local organising cultures and groups throws light on wider political, social and ideological struggles of the time: over slum clearance, urban renewal and the high-rise question; over migration, changing demographics, housing provision and poverty; over New Left, community, social democratic, radical and racial politics. The case is also situated within a moment of social, cultural, political and economic transition as the optimism of the 1960s radical youth cultures shifts into the  labour struggles, strikes and unemployment of the 1970s.

Locally, the Golborne case emerges alongside other struggles for the control of space. The nearby Telford Road community-built adventure playground was built in the late 1950s on waste ground, with Pat Smythe who set it up also involved in the Community Plan and other community organising (Walker n.d.) (Figure 5). Whilst during the 1960s, Acklam Road residents were fighting to be rehoused during the Westway construction and “the hell of the new motorway” (SRC 1971b) – with George Clark in action again. During the 1970s the community fought for control of the space under the Westway. The resulting community Westway Development Trust still exists, as well as many other organising groups defending, contesting, developing or creating spaces, such as the Lancaster West Neighbourhood Team, ‘Save Trellick Tower’ (Greyscape 2021) and Grenfell Action groups: in an area still divided by classed and racialised structural inequalities as demonstrated by the slow violence of displacement inflicted through Trellick Tower’s gentrification and through the grievous harm inflicted by the Grenfell Tower fire

Debbie Humphry’s research focuses on understanding the lived experiences of housing, neighbourhood and community campaigning in the context of UK national policy and global capitalism, focusing on theories and practices for social justice. She is based at Oxford Brookes University as a researcher on Spaces of Hope/People’s Plans and also works with housing, planning and other campaigns. She draws on her previous experience as a photographer and community worker to develop engaging participatory methodologies and practices. She is editor of City: analysis of urban change, theory, action / www.debbiehumphry.com / Homes for All / Community Plan for Holloway / Disabled People Against Cuts DPAC

I would like to thank John Palmer for his very useful comments on an earlier version of this blog.

Also many thanks to Mugiko Nishikawa, professor of anthropology at Konan University Japan, who shared some of her extensive archival and interview research work on 1960s and 1970s Notting Hill, published in her collaborative Grassroots Media Zine aimed at making academic work accessible to wider audiences, exploring the potential of multi-cultural networks created through the production and dissemination of independent media. Mugiko will feature the Spaces of Hope/PeoplesPlans research on Notting Hill on the Harukana Show. Watch this space for further collaborations. Contact the Zine at grassrootsmediazine@gmail.com

Curtis, Adam. 2021. I Can’t get you out of my head. BBC documentary. BBC iplayer

(SRC) Social Rights Committee. 1971a. ‘A Community Plan by the People for the People’. The Golborne. Special Issue. January 1971. London 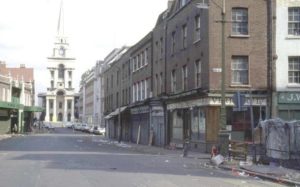